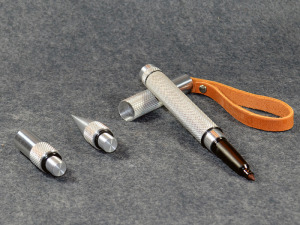 Writing utensils are a an absolute must in anyones EDC kit. If your a good member of The Gear Whores, multiple types of writing tools are at your disposal right now. Most likely amongst the myriad of tactical marking tools in your murse, one of them is the trusty Sharpie marker. This almost universal, permanent marker is a main stay around gear bags, IFAKs, and those redacting .gov paperwork. The only major problem it that for more rugged tasks, its semi-flexible barrel can be a problem. With the introduction of the stainless Sharpie pen, this was much improved. Now with a new effort on KickStarter the Sharpie is a tough as nails writer, reborn as the Tactical Marker.

This solid 7075 aluminum marker barrel is designed to accept the now available refills for the stainless Sharpie pen, according to the KickStarter Page:

“The Tactical Marker-TM is designed around the classic Sharpie refill and ships with three (3) tool tips, machined from tough 7075 alloy. The TM uses a full size Sharpie refill that threads into the barrel.”

This over built marker body also boasts some additional add-ons to include a heavier endcap dubbed the “Hammer” and the ever expected tactical kubotan “Spike” point. We’re quite happy with what is being shown so far from the Tactical Marker and as always are ready and waiting to get this bad boy in our hands and put it through some testing. You can back the Tactical Marker here on Kickstarter.