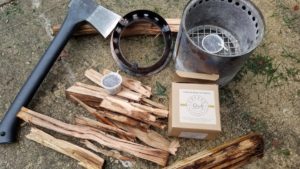 We all know the basic components of a fire being tinder, kindling and fuel. Each component is designed to slowly catch the next stage on fire. The fun part is how do you get your first flame going and keep it going long enough to get the whole thing up in a blaze. This is where our preferred fire starter of choice comes into play. For some it is a birds nest, fuzzy stick or fatwood. For others it is a more modern or homemade creation like a  Wetfire (or the poor man’s version the Weber charcoal starter cube) “10 minute match” or the venerable old lint/wax/egg crate starter. Over the years we’ve used all of these, but have alway had a place in our heart for the egg crate fire starter, which maybe why we were attracted to the Coffee Wick Fire Starter to begin with. This creation utilizes spent coffee grounds and soy based wax, packed in a cardboard cup with a small wick attached for ignition to get your outdoor fire party started.

Right out of the box you can feel the heft of the Coffee Wick Fire Starter. These things are densely packed with a hearty combination of go-juice leavings and soy paraffin. This piqued our interest so much that we took one over to the scales. On average each cup is about 1.5oz. As a comparison we grabbed some of The Gear Whores own homemade ye olde timey lint/wax/egg crate fire starters and found the average weight to be 0.5oz. This certainly gave us the warm fuzzies about the Coffee Wick Fire Starter burning long and strong to get us an easily lit fire.

Each cup was evenly filled, consistent in weight, and adorned with a nice ½” wick on the edge as advertised for easy lighting. They even had a very subtle coffee aroma to them. They seem sturdy enough to simply toss in a pack or fire kit and just let them roll around until the time calls to make a fire.

After splitting a bit of wood down to a size that would fit in the Solo Stove Campfire we pondered how to approach lighting the fire starter. At first we thought perhaps we could place the fire start in the stove first, reach in and light it using the Exotac FireSleeve. This proved to not be as easy as initially thought. So we went with light the Coffee Wick first, place it in the Solo Stove and then build a fire.

This certainly is where the Coffee Wick showed us that the name sake wick feature was handy. We just lit it like a candle and didn’t have to hurry or fumble around to avoid getting burned while we placed it in the Solo Stove. We gingerly placed it inside, waited for the entirety of the top of the Coffee Wick to melt and burn and then just built our fire around it.

In no time the Coffee Wick Fire Starter did exactly what you would have expected, start a fire quickly and easily, even when the wood is a bit moist. It burned for an ample amount of time easily allowing us to just add whatever moist wood would fit in the Solo Stove Campfire and wait until it was all lit.

We do have a place in our heart, as mentioned, for the old lint/wax/egg crate fire starters, so the similarities with the Coffee Wick Fire Starter got our nostalgia meter going. These things are dense, packed fully of fuel to get your fire burning. The wick feature is a big bonus for allowing you to light first in your hand and then place it where you want with plenty of time to spare. Its unique ingredients combine into a great and functional product. 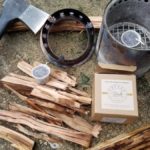