The gift of Prometheus is an immortal piece of edc gear. A gear whore without fire is no gear whore at all. This is probably why we all own many various tools that employ many different methods to start fire. Many of us employ the modern miracle of the Bic Classic lighter. This nearly universal and inexpensive item has been a go-to for outdoorsmen for years. Though the Bic is effective for many things, it could be made better for the great out of doors. Luckily the good people of Exotac have been hard at work trying to add to this lighters usefulness and in the process have created the fireSLEEVE. The Exotac fireSLEEVE takes the traditional Bic lighter and wraps it in a waterproof floating sleeve, adds lanyard mounting points and provides a gas lock feature to enjoy a thumb saving continuous flame.

This isn’t Exotac’s first rodeo when it comes to putting out a well designed, made in the USA, product. The nanoStriker and MatchCap XL have certainly set a high bar for this outdoor design house, and not so surprisingly the fireSLEEVE live up to this legacy. The idea is quite simply, a soft silicone bottom section tightly conforms to the contours of the lighter, while a hard glass reinforced top cap seals the unit up tight against the elements, and accidental discharge. 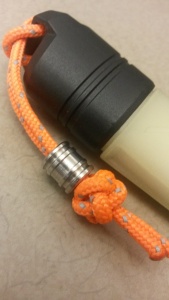 Right out of the gate the packaging is even simple and makes it easy to understand how to utilize all of the features of the fireSLEEVE and the included lighter. Having a lighter already in the package was a great touch, making the 5 pack of Bic lighters we bought spares, which we were ok with. Our curiosity got the best of us immediately and we had to remove the included lighter from the fireSLEEVE to test the fit. Let just say it was tight. Pressing up on the bottom rim of the case, we slowly edged the lighter up and out to find that whoever packaged it wisely applied a bit of lube to the lighter to assist entry. We also noticed that directly in the bottom of the fireSLEEVE was a hole. This obviously is to prevent heavy suction, or pressure, while inserting or removing the lighter. Even with this hole, just feeling how tight the lighter fit, we were not in any way worried about this being a compromise to the watertight seal.

With the lighter back in place we were able observe the fit in regards to both the cap and the fuel lock feature. First the cap, when pressed onto the body is sealed with a series of three ridges that are molded into the soft body, creating a tight gasket. Pressing the cap on and pulling the cap off creates satisfying “pop” sound confirming this airtight seal. Again with the cap off you can see the area near the fuel activation button is cut to create a strap feature to allow you top roll this section over the fuel button for a continuous flame. 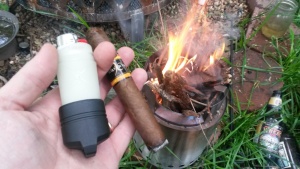 The very first test for any lighter is simply lighting. Granted we know how a disposable lighter works, but how does it feel and operate now that it’s in a new exoskeleton. Popping off the cap we found that, as advertised, it comfortably nests on the bottom of the Exotac fireSLEEVE body with very little effort. After only a few tries of this maneuver we were able to nest the cap one handed.

We can not say the same for the usage of the gas lock strap. The gas lock strap is a great feature, but certainly requires the usage of both hands. Once you simply push up on the strap until you have rolled it up over the lighters gas button, you will need to hold it in place with your dominant thumb, while rolling the flint striker with the other. If you do not hold the strap in place,  you will more than likely knock it off of the button making this feature useless, and then repeating the entire process. When using the gas lock successfully it is a very useful feature. It certainly came in handy in our testing when lighting a Solo Stove Campfire and then starting up a Toraño Noventa cigar, as we were able to have a continuous flame without a tired or burnt thumb.

The fireSLEEVE itself is quite rugged, and easily protected the encased lighter from simple drops and accidental gas discharge while in the pocket. The extra size did make the lighter more noticeable when carried, and the extra grip of the silicone body also gripped the inside of our pocket a touch more when it was trying to be removed, but none of this was too serious of a concern. Adding a lanyard and bead to the cap helped to make the Exotac fireSLEEVE easier to grab or find when dropped.

If you happen to drop your lighter in water, Exotac claims that the fireSLEEVE will both float and stay waterproof in 3 feet of water for up to 30 minutes. Being impatient we did 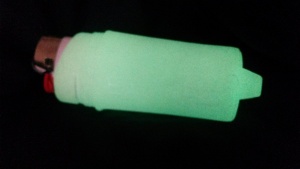 Exotac fireSLEEVE glow in the dark

not wait 30 minutes, but we did toss the assembly into a mug of water. As advertised, the fireSLEEVE did float. Removing our bobbing fire starter from it’s bath we popped off the top and also, as expected the lighter itself was dry and easily fired right up.

Our fireSLEEVE has the extra feature of being glow-in-the-dark, which was offered as a limited edition option from the product’s Kickstarter campaign. After being either left in direct sun, or exposed to a 120 lumen flashlight the moonglow material used in this glow version of the fireSLEEVE became quite luminescent for a fair amount of time. Even after a night’s sleep there was a very dim glow that could still be observed.

We’ve always carried a lighter of some design, and tend to leave disposable lighters tucked away in all of our kit. The Exotac fireSLEEVE certainly takes the venerable old Bic lighter to the next level by adding some serious functionality upgrades, making your lighter a floating, waterproof, rugged, easier to use everyday and outdoor fire machine. The cost of the Exotac fireSLEEVE is comparable to many other lighters, such as a Zippo, but offers a better fire source in a butane lighter. If you are looking for a simple, well designed, made in the USA, outdoor lighter, the Exotac fireSLEEVE is certainly the one to buy. 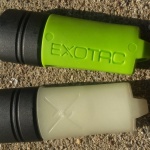