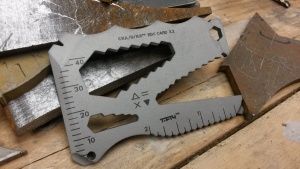 Credit cards are a universal item in peoples pockets today, but outside of helping your buy the things you need what do they do? The answer is, not much other than being a fancy piece of plastic with a magstripe and numbers on it. Their major contribution to the edc landscape has been to provide a standard form factor for items that fit in your wallet, besides old fashioned analog money. With this shape in mind the Cha-O-Ha Design Company took it on themselves to take a similarly shaped slice of S35vn blade steel and make an everyday carry tool called the EDC Card.

Tools of this type are becoming more popular. Many knife makers, such as Snody and Microtech offer titanium card tools, but those mostly focus on their ability to be edged implements and skimp out on other options. Some tools made do include options such as wrenches and screwdrivers, such as the gimicky Wallet Ninja or the generic $3 “survival cards”, but these tools are typically made with low quality, thin steel or are designed in such a way that many options are not easily usable. The Cha-O-Ha EDC Card overcomes these shortcomings in quite a few ways.

The material used in the Cha-O-Ha EDC Card is a huge plus for this tool. This card 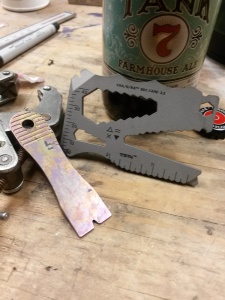 is carved from a generous chunk of CPM S35vn steel. A steel originally produced as a collaboration between Crucible Industries and Chris Reeves Knives, it is considered a premier steel for use in high end knives and tools. As an example we’ve worked with S35vn in our time with Sniper Bladeworks and Grindhouse Knives, and it has proven to be excellent in its applications with these knife makers, and has a special place in our heart. To have this material in a compact, easy to carry, card shaped tool, certainly speaks to the durability and longevity that the designers at Cha-O-Ha had in mind when creating the EDC Card.

For being slightly smaller in overall dimensions than a typical credit card the EDC Card packs quite a few tools into it’s frame. According to the Cha-O-Ha website it includes the below list: 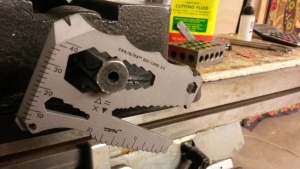 A multitude of wrenches certainly dominate the list. Of them the open ended wrench option is certainly a good design, as this seriously extends this tool’s capabilities. The open ended wrench area, in conjunction with the recesses milled for a retention O-Ring, act as the EDC Cards bottle opener feature, which for any edc tool is a required feature.

The outside edge of the EDC Card is sculpted in such a way as to offer essentially three finger grooves and a recessed area for your thumb. This attention to detail really helps you to had a nice feel to the EDC Card when held and used. It also offers the ability to really put this device to work.

Being a thick slab of S35vn steel is good for durability, but is not so good when trying to get it into one’s wallet, unless you’ve accounted for it in design, which apparently Cha-O-Ha did. Trying to get the EDC Card in a Spec-Ops The Wallet Jr was not an issue, even with it already laden with other cards, and cash. Placing the now loaded wallet back in our pocket, one did notice the added thickness and rigidity of the wallet, but it isn’t anything that one wouldn’t get used too. 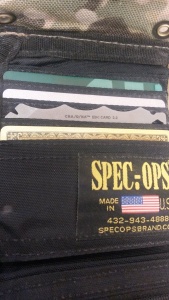 Of the tools available on the EDC Card we decided to test the bottle opener first,which worked perfectly well. A quick snap of the wrist, after placing the open wrench end of the card on top of a bottle of Boulevard Tank 7, provided us with a cold and tasty farmhouse ale. Next we utilized the flathead driver milled into corner opposing the prybar to tighten up the pivot on our Sniper Bladeworks LPC. The flathead was fine enough to easily do the job, and precise enough to not mar the titanium screw. Playing around we wanted to check the sizing on the closed end wrenches. Wrapping the EDC Card around the flat table adjustment of the mill showed that the graduated design of the wrench allow for quick and easy fitting on the float arm.

The team at Cha-O-Ha Designs have managed to cram a host of useful everyday tools into one great piece of steel. The overall size is perfect to fit in your wallet and still be useful and comfortable in the hand. Of the features we used it performed very well at its tasks. This overbuilt well designed card has earned a place in our everyday carry kit.